What is Shellac?  Shellac is a fast drying transparent finish that is mostly used to seal wood, but can also be used on other surfaces.  It can be used as an undercoat or as a top coat. Shellac is a natural substance (made from bugs or something) and has been around forever.

Is it a good undercoating for foam?  Here is my experiment:

END_OF_DOCUMENT_TOKEN_TO_BE_REPLACED

Furthering my quest to discover the cheapest way to pre-treat EVA foam to get the best results I ran a little comparison between Elmer’s Tacky Glue and Plasti-dip.

These scraps of foam are all painted with 1 part Tacky Glue to 1 part water and then painted with one coat of metallic spray paint.   The numbers indicate how many coats of the glue that each piece got.  The gouged up foam was just so I could see what impact the tacky glue would have on imperfections.  END_OF_DOCUMENT_TOKEN_TO_BE_REPLACED

Following up my post on my Sealing EVA Foam Experiment, I have undertaken to expand my knowledge of Tacky Glue and its possible use to replace Plasti-Dip as my primary undercoating for EVA foam.

Using a scrap piece of EVA foam I experimented with different thicknesses of tacky glue to try to determine what thickness would be best to create a shiny, metallic type surface out of EVA foam. 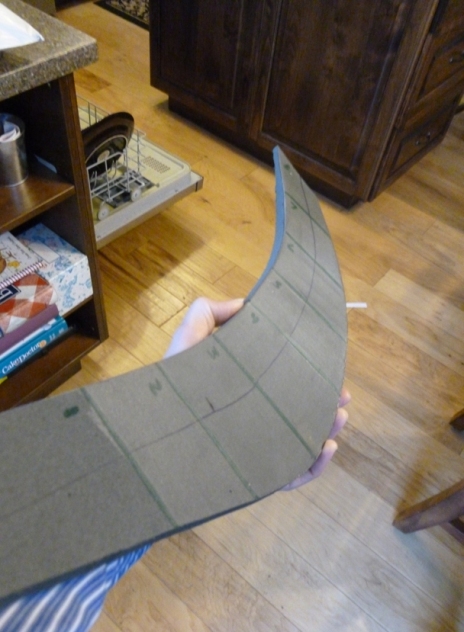 END_OF_DOCUMENT_TOKEN_TO_BE_REPLACED

There is a lot of talk on the internet about different ways to seal EVA foam.  I’ve always used plasti-dip, a product readily available in the USA in spray form or “dip” form.  A whole suit of armor could easily use 5+ cans, and at $7.00 or so a can, that can add up.  Honestly, because of cost, I’ve never put on as many coats of the stuff as I needed to to get a really clean, shiny surface.

I’ve seen it recommended on the internet that you can seal foam using a mysterious substance called PVA glue.   What is PVA (polyvinyl acetate) glue?  Well, I haven’t really determined that.  Some people say it’s woodglue. Other’s say it is white glue.  Still others say that it is a specially glue that you can buy to bind books.  Honestly, I’ve googled and googled and haven’t come up with a definitive answer.   So I went to the craft store, and then to the home improvement store to buy some of this PVA glue, but not one bottle of glue said PVA anywhere on it.

In the past I’ve tried sealing foam with both woodglue, and modge-podge, and both produced cracked undesirable results.    But maybe I was just doing it wrong?  Some people recommend diluting the glue, 1:1, 1:3, 1:10 – I’ve seen all variations.    And then recently, I saw someone recommend using a combination: woodglue topped with plasti-dip.

So before launching into another project that would inevitably cost me $50 in plasti-dip, I decided to run my own experiment. 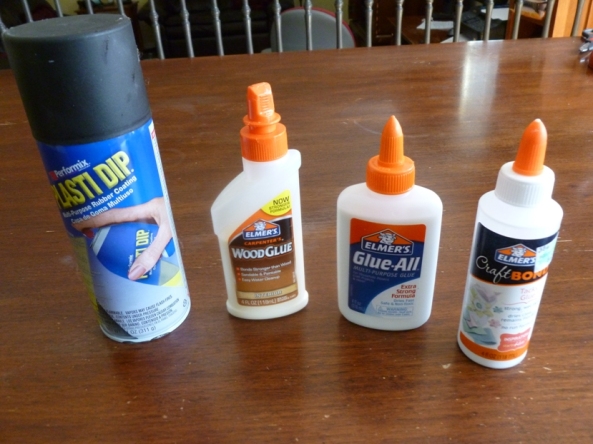 END_OF_DOCUMENT_TOKEN_TO_BE_REPLACED

To get the depth of the ice that I was looking for I decided to add some LED lights.   I bought a roll of white LED lights off of eBay ( I’ve seen them at Home Depot), and some 32 gauge wire and battery pack from Radio Shack. Then I scavenged a on/off switch from a flashlight. 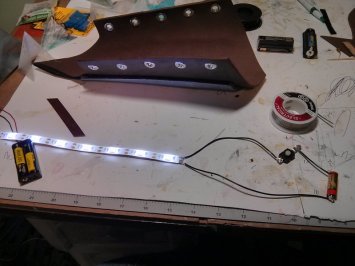 END_OF_DOCUMENT_TOKEN_TO_BE_REPLACED

How do you paint something to look like ice?

That’s the question I worked on for weeks. I did lots of research online with little success, so I just started experimenting.  I experimented with acrylic paint in various combinations, glass paint, and spray paint. All in different combinations.  Ice is more than just white or blue, it has a depth of color, a fading from shade to shade that I really just couldn’t capture. 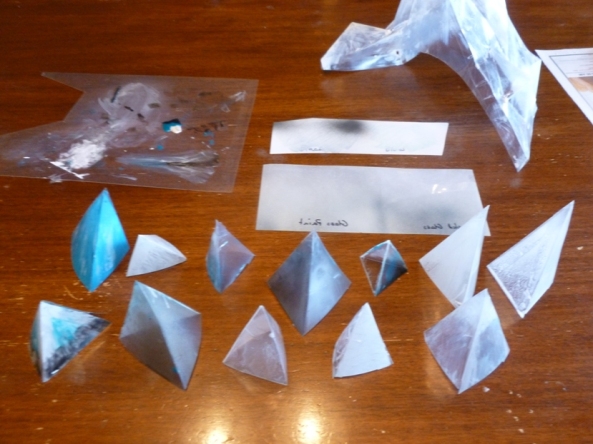 Here is what I came up with:

END_OF_DOCUMENT_TOKEN_TO_BE_REPLACED 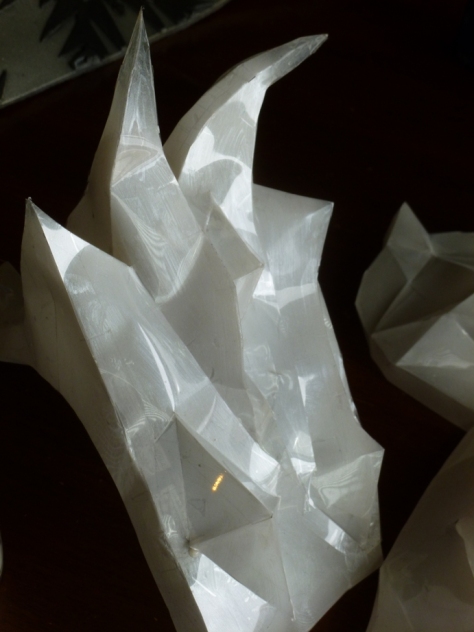 END_OF_DOCUMENT_TOKEN_TO_BE_REPLACED

Photo we took at the prejudging

Salt Lake Comic Con is the third largest con in the US.  The cosplay contest equally as large. I entered my Sanctuary Base Space Suit  last year and didn’t make it to the stage round, so I was really thrilled this year when my Missy/Cyberman made it past the prejudging (done the week before) and onto the big stage.

The cosplay contest was on the final evening of the con and we had spent all day at the con so by the time the contest rolled around we were already pretty exhausted.  The cyberman isn’t very user friendly to wear (you can really only wear it for about an hour before it’s too much) so we didn’t wear it to con that day.  So that meant a long walk to the car to get the cyberman (which fills a large lawn bag) and then a long walk to a bathroom to get the thing on.  It was comical really.  My daughter would hand pieces of her Mandilorian over the stall to me and then I’ll hand back pieces of the cyberman over the stall wall to her.

Then the nervous standing and waiting.  It’s fun to talk to the people around you and look at their amazing costumes, but also a little intimidating because they all look so good.  But there is a feeling that you’ve found kindred spirits because you have so much in common.

Waiting for the contest to begin.

Then comes your few minutes on stage, they play the music and you have about a minute to pose and smile and move in a way to show your cosplay in the best light.   My daughter and I didn’t practice in advance (we didn’t really know what to expect) but we came up with a little skit of sorts where the cyberman walked in a straight line and Missy danced around him with her umbrella.   I have no idea how it looked or if it worked but people clapped and told us we did a good job (the contest is online somewhere but I don’t have the guts to watch it).

In the end we were called up to receive an award and I was totally shocked!  There were so many good costumes there, I didn’t expect to win anything.   Then the awards for our category were called – Third, Second, First, and my name wasn’t called at all. So I thought that it was probably a mistake.   But then at the very end we were called to the stage and given the “Judges Choice” award.   We took a bow at center stage and everyone clapped.  It was really fun and a thrill.

Here is a collage of some of the other people who we were competing against that day to give you an idea of the amazing talent.

I had a fabulous time at Salt Lake Comic Con.  I dressed all three days as Missy.  Missy is a great character to portray and I had a great time wearing her skin for a few days.  I ended up alone for one of the days and it might have been one of my favorite days because it forced me to meet and talk to new people. I even had lunch with someone (another cyberman builder) who I had only met online.

Jenna Coleman was one of the guests and I waited in line to ask her a question.  When I made it to the microphone she called me “Missy” and told me I had a great costume.  The camera panned to me and the entire audience (5000+) applauded and cheered.  It was amazing, and I was so happy to be able to ask Ms Coleman my question.

Bolstered by that experience I also asked questions that same day of Felicia Day and Christopher Gorham (who I was able to meet later in person).

I took hundreds of pictures with people, half of which thought I was Mary Poppins. I even had one father ask me to discipline his children (?).  If they called me Mary I’d be sure to smile in the photo, but if they knew I was Missy I was able to scowl, smirk, and I even got to kill an Osgood or two with my device.

It was also really great to spend some of the time with my teenage daughter, who had made her second ever cosplay.  She also got stopped for a lot of pictures and had a really good time. 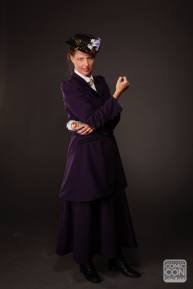 Here are some pictures of a home photo shoot I did with the cyberman in an attempt to catch it’s details.   I’ve made a few modifications to the costume since this shoot, but I’m happy with these pictures for the most part. 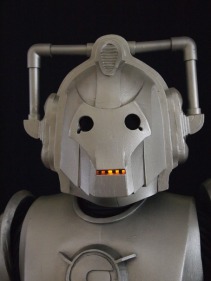 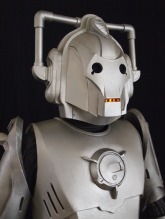 Cosplay Featured in Doctor Who Magazine 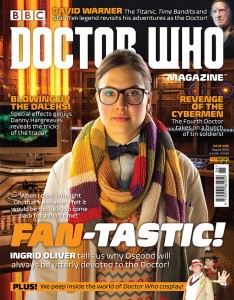 Sanctuary Base 6 Spacesuit – featured in Doctor Who Magazine